Why WITness Success? Why Me and Why Now?

Last year I attended the Allies Dinner at WITness Success because it was being held in Chicago right after Midwest Dreamin’. I knew many of the organizers of WITness Success and wanted to see what the event was all about but couldn’t stay past the dinner. It didn’t take long for me to realize that I made a mistake. I should have stayed for the entire event.

So Why Me?
For starters, I live in a family that’s nearly all female. My wife and I each have a daughter from our previous marriages, and together we have a daughter. We also have two granddaughters, and for a while, they all lived with us, except for my older daughter. Earlier in my career (and I do mean WAY earlier – way before Salesforce) I worked in an office where I was the only man. Come to think of it, most of my career I’ve had women as managers, and back when I was a child, both my parents worked and contributed to the family’s wellbeing. And I grew up with one sister.

It wasn’t until I started working for a company in the technology field where I started to see career disparity between the genders. Some referred to the senior leadership team at that company as the “good old boys network”. Senior Management was all male…and not only that, they were all what I would call “strong personalities.” Often, meetings there almost turned into shouting matches, with some people leaving feeling like they were run over by a bus. I managed to avoid those conflicts during most of my time there. However, the one time I spoke up with my opinion, (and spoke up rather loudly) I challenged the company president directly on an issue around his expectations being unrealistic on a task he wanted done in 3 weeks when I felt it needed 3 months to be re-done his way.

I lasted only 6 more weeks at that company. It’s rather funny now, looking back on my career. A couple jobs prior to that role, a male manager told me I needed to speak up more, I needed to learn to ask for help before things became a crisis, and that I needed to voice my opinions, regardless of if they agreed with anyone else, because that’s how we all grow, he told me, and he added that good managers appreciate pushback from their team members. Apparently, that philosophy doesn’t sit well with everyone. On the upside, ultimately, losing that job led to my first role in the Salesforce ecosystem.

And Why Now?
As soon as WITness Success 2018 was announced I started to make mental plans to be there. I was happy to learn it was paired up with Day Dreamin’ @ 5280, another community event that I’ve wanted to attend, but hadn’t been able to yet. Somehow I got into a conversation with the organizers of Day Dreamin’ and the conversation turned to me having some sort of speaking role there. Of course, I was all over that – I love speaking at events and sharing my passions with anyone willing to listen. When the call for speakers for WITness Success opened, I was encouraged to submit a session by one of the organizers on the importance of personal branding. Anyone who knows me or follows me on Twitter will likely agree that I know a thing or two about personal branding, career building, supporting causes, and treating everyone with respect and dignity. (I’m not saying anything more about my session, other than the title is “Personal Branding Knows No Boundaries.” – If you want to know more – come to WITness Success and witness it yourself…or wait till after the event.)

I was very fortunate to have that session selected by the WITness Success team, which now meant I had 2 reasons to be in Denver in late July. Call it luck if you like. I prefer to think of it as one more successful outcome from my years spent building my personal brand. (Oops – that might be a little spoiler alert for my session at WITness Success.)

Did I answer the “Why Now” question? Honestly, I would have to say no! I avoided it. So, here’s the real scoop on why now. Because NOW is the time for conversations like this to take place. NOW is the time to drive changes that lead to everyone getting treated with dignity and respect. Salesforce (the company) has made it a priority to work toward equality for all. They don’t just mean all people working at Salesforce, or all people working with Salesforce. They literally mean ALL people, EVERYWHERE. That’s a powerful thing. That’s the right thing to do. And that’s something I want people to know I fully support.

And that’s why me, and why now. 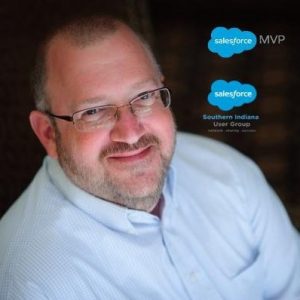